The Town of Prescott Valley will be revving with action over President’s Day weekend as some of the best off-road motorcycle racers in the country are coming to Northern Arizona to participate in the inaugural “Rough Rider 100 Off-Road Motorcycle Race.” Even amateur motorcycle enthusiasts who may have just bought their first motorcycle from cleanharleys.com are welcome to come down and enjoy all the festivities of this great occasion!

A number of young children and amateur racers will take the course to begin the festivities on Saturday with the Rough Rider Women’s Championship concluding the day. The Race of Champions-the final race that begins at noon on Sunday and is expected to last two-and-a-half hours according to the official website-features many riders who took first place in their various races across the west. The competitors will be battling for a share of the $10,000 purse.

“There’s going to be a lot of great riders…but these are the best riders,” Mike Johns of Team6Events said in a phone interview. “There’s many, many challenges that these guys face as they compete to win their share of the $10,000. Along with the prize money, the winner will also be named “Rough Rider Champion” and receive a statue of area legend Bucky O’Neill.”

O’Neill, the former mayor and sheriff of Prescott, rallied a group of cowboys from all over the area to aid in the Spanish-American War during the late 1890s. Johns mentioned being interested in the story of the northern Arizona Roughriders since moving to the area in 2008. “They were young, vibrant men right in the middle of starting their lives,” Johns said, adding the men received a parade to the train depot by townsfolk, a flask of beer, a pipe and a ham for their journey. “They were brave, they were fearless and they were patriots.”

Considering the demanding physical nature of the sport, Johns relates the riders of today to those of the past as they race through the tough terrain around Lynx Creek in Prescott Valley.

“These would have been the people that hopped on their horses instead of their motorcycles and went there,” Johns said. “There is a real correlation between the spirits of these two groups and I wanted to bring that history to this race.”

The race location is on land owned by the Fain Signature Group and Mr. Tim Hendrickson where the Fellowship of Christian Athletes host their annual children’s motocross summer camp. As the goal is to raise money for the camp, the location fits like a glove.

“The Fain family have been absolutely wonderful supporters of the kids’ camp since day one…it made total sense to bring this to them,” Johns said. “It’s a great home for the event because Prescott Valley is such a central place for people that love an outdoor lifestyle.”

Johns mentioned spectators will have a unique experience as the race can be seen from much of the property by simply hiking up one of the hills. “This is an absolutely perfect outdoor event in a venue where these racers can actually be seen for much of the race,” Johns said. “It’s the opportunity to come watch these guys race in natural terrain with rocks and cactus…can’t do that anywhere else, only in Prescott Valley,”

In year one of the event, Johns is looking to create a fun atmosphere and build a solid foundation for the future.

“It’s just all about having a great time in our wonderful hometown of Prescott and Prescott Valley,” Johns said. “(What) I’m hoping all comes out of this is everybody just goes away with this big grin, great memories and a wonderful day with family and friends.”

The weekend begins on Friday, February 16th from 12:00pm-10:00 pm at Buffalo Wild Wings in Prescott Valley on 2985 Centre Ct. with the Rough Rider Reception. The full schedule can be found on “The Rough Rider 100” official website: http://roughrider100.com/schedule/ . 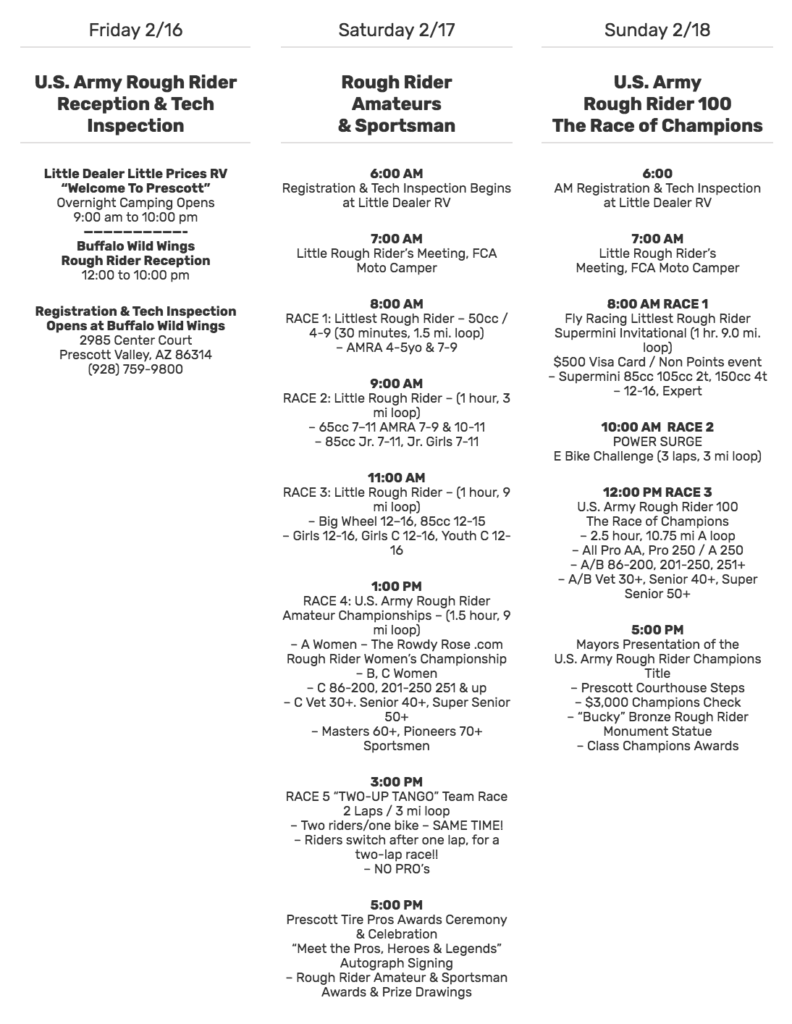 Get ready for battle & GET SOME February 17th & 18th in Prescott Valley at the
Rough Rider 100 Off-Road Motorcycle Race!! See you there!!!